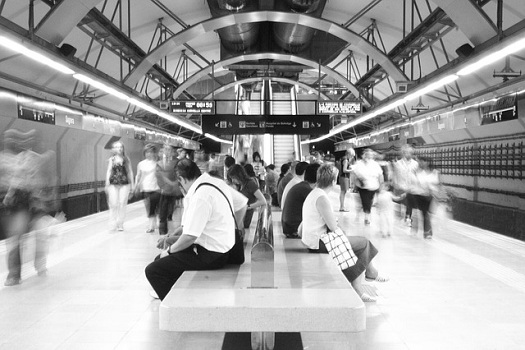 Let’s travel back in time for a moment. We are in the ‘60s, we have the possibility, questionnaire at hand, to ask the passersby, citizens of the ‘60s, how do they imagine the forms of transport of the future, in fifty years or so, let’s say in 2016.
We are sure that a large part of the respondents will answer positively, proposing “futuristic” situations, in line with the science-fiction movies of the period, in the wake of the enthusiasm due to the race towards the conquest of space. To strengthen the optimistic and positive opinion on the progress of “the citizen from the ‘60s” we also have the recent diffusion of the household electrical appliances, technological tools that facilitate our life.
But, returning suddenly to our time in 2016, we realize that the things didn’t happen as imagined. The cars don’t fly, not even the skateboards like those in “Back to the future” movie, no teleportation, no flying eggs, no rocket ships parked in front of our house.
This strange premise of ours is build up by the numbers provided by ISTAT, the Italian National Institute of Statistics, in the study called “Gli spostamenti quotidiani per motivi di studio o lavoro” (“The daily commuting for study and business purposes”) issued in August 2014 with reference to 2011:

“They are almost 29 million (48,6% of the resident population) the persons who commute every day on business or for study purposes, over the last decade the number has increased of approximately 2,1 million.

“… the time serving to commuting has been extended. The quota of those people who spend up to 15 minutes has decreased considerably.”

The number of people who for work must “immerse” in traffic has increased and for many of them the travel times have been further extended. It is about persons who spend an important part of their lives travelling daily between their residence to work/education place and vice versa.
The structural measures aimed to improve the mobility in urban areas can be counted on the fingers of one hand, the cars have been enriched with optional package, but basically they remained the same, the phenomenon of distance working has become smartworking, on the rise, but without reaching significant numbers yet.
Anyway technology came to the aid of the “commuters of the 21st century”, not in the manner we have hoped for, not optimising the transports nor reducing the travel times, but providing fruition’s tools and social connection, “smart” tools that may be connected to the internet even during the trip.

The quarterly report AudiWeb Trends of June 2014 describes an extremely “smart” Italy with 25 million people who declare to access to the Internet through a smartphone (+13,7% in the first semester 2014) and 9 million who declare to log on through tablet, nearly double compared to the previous year (+88%).
These tools have changed the commuter’s life allowing him to spend, at least in part, the time he wasted on commuting.

In Italy the percentage of “mid-range” commuters who uses internet during the travelling is around 60% (Ansa source). Of these, a large part uses their own “social network” mainly WhatsApp and Facebook, 42% surf the web, 31% make some video calls, 27% declare to use video streaming services (the same Ansa source).
During long-distance travelling, for instance by train or by plane, many travellers, especially the “usual” ones, the “long-range” commuters, use their own laptop, tablet, e-reader or smartphone to work, see a movie, listen to some music, read a book or a recipe, plan a trip, check the weather, read the latest news and so on. The percentage of people who use the internet is really high among the “long-range” commuters, both for the ability to use modern tools of communication, indispensable in working environment, as for a greater financial means when purchasing services or subscriptions on-demand.
All we have to do is getting on a plane or a high-speed train to come across many cybernauts, sat side by side, sometimes in rather narrow spaces, completely indifferent to each other, each of them staring on their own display. There are those who are laughing up their sleeves, those who get excited in a debate regarding work, those who seem hypnotized, totally captured by the images coming from their own display. The “smart-commuter”, especially the “long-range” one lives in his “virtual bubble” during the travelling…

The “Smart Commuters” phenomenon is significant in both cases, short or long-range, whatever the types of diploma or financial means or skills and personal interest.
This symbiosis between commuter and web, and “smart-devices” is based on:

The strength of the Internet stays precisely in its availability, openness, in succeeding to provide a ubiquitous service, while travelling. The ubiquity, the achievement of being reached in motion, is perhaps the characteristic what most distinguishes Internet from television, static and one-way tool par excellence, and because of this, less modern and of the moment.
The intensive use of smart devices by commuters should not be underestimated, we are dealing with a mass phenomenon that makes familiar these electronic devices, stimulates the digital reading, increases the relationships among people “located elsewhere”.
In conclusion, the urban commuting helps spreading the Internet within our society.
Once again we have to emphasize in our articles, how the internet gains momentum where the real world is lacking, where, in absence of concrete solutions, or where there have been no intention to find any, the internet offers new virtual ways of communication and entertainment.