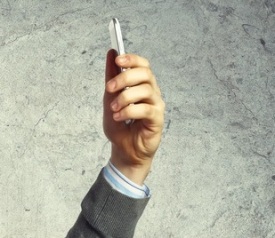 Let us imagine for a moment that we are in one of our cities and equipped with a questionnaire we begin asking the name of a social network or better which one is the most used social network online? With all the probabilities we’ll get a plebiscite for Facebook. Facebook is the social network par excellence, through this tool was found the first global social web composed by hundreds of millions of knots, real or virtual it really does not matter. Because of Facebook many of us have started to use internet practically daily, interacting, expressing our feelings in front of the computer, having a cyber chat. Yet, according to the statistics, Facebook seems to go through a downturn, the following diagram (from global web index source) underlines the increasing indifference toward Facebook, no more a daily tool! The number of the daily active users has gone down during the last couple of years from over 80% to just over 50% of the members, a significant change for an important part of the users. .

Obviously these data must be carefully carried out and cross-checked with other indicators. However it is undeniable that in the 2013-2014 period, therefore in a rather large period of time for a social tool, for a good part of its members a change has happened in the day-to-day use of Facebook. Hundreds of millions of users, especially the youngest ones, are moving toward tools denominated “instant messenger”, fast , intuitive and low cost tools, available on smartphones, first of all Apple’s iMessage, Skype, QQ and, most of all, WhatsApp. This first social migration, a virtual diaspora, has its origins in various and concomitant factors, among these we quote:

To sum up, a new generation of smart tools, quicker and lighter, more exclusive, are progressively replacing the traditional social tools, in vogue for almost one decade. It is interesting to observe how this evolution, still in its early stage, is accepted more by the youngest, great smartphones’ users, willing to welcome without hesitations new tools, experiencing new contexts. Probably in the next couple of years the “over 45” will be more involved in this “migration” towards instant messages. It is also important to underline how the “present” social tools have determined this acceleration toward the IMs. In fact, tools like Facebook have extended our net of friends and they have emotionally exposed us. Now the instant messengers allow us to timely address our messages, not to everybody but to a precise group of people, rationalise our emotional choices and speed up our communications. Furthermore, when it comes to novelty, all of us, especially the youngest ones, want to try it! The following diagram, source “Statista“, highlights the increasing global trend of WhatsApp. 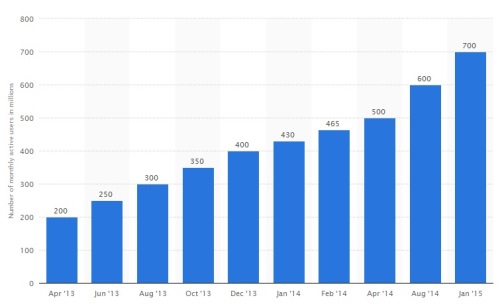 In reply to all this, Facebook, the social network’s colossus, took immediately some countermeasures, one of this being the creation of a new IM tool denominated “Facebook messenger” which has kept loyal a significant part of users. Another one is the purchase of WhatsApp for 19 (or 22?) billion dollars and last but not least the activation of techniques of participation (email marketing) based on the constant emails to its members. Practically the stepmother, tired to hear from the magic mirror that Snow White is more beautiful than she is, has decided to have a facelift and a liposuction and then, simply to bribe Snow White (perhaps with the purpose of locking her in the castle? Who knows…) From the strategic point of view these are excellent moves, before being eroded (perhaps devoured?) by an expanding phenomenon, the result of the social acceleration online, Facebook provides an “instant” version to all of its users and at the same time, due to its well-known availability of money, incorporates the most emerging part of the IM phenomenon in order to keep under control its spreading as well as the large audience involved. Our relational universe is evolving very fast! We use faster and faster tools, interactive and instant. We are more and more addicted to social tools in order to communicate with our friends and relatives. Facebook has changed the web and our habits. It permitted us to build our first emotional-relational network, it has made it global, but now the web proceeds towards a direction even more instant. The change is so sudden, dazzling and unpredictable, that even Facebook launches on the market a “smart” and “instant” version of itself, increasing as well its promotional commitment to its members and, at the same time, managing the one that was, till few months ago, its main rival.

One last consideration regarding the privacy: with the diffusion of the IM on our smart phones what will happen with our comments, our photos and our contacts? Let us say, at best, it will be an “overexposure“… Only one decade has passed and we are only at the beginning of World 2.0, who knows what needs to happen?

In thanking the “Global Web Index” and “Statista” for the contents examined in detail published online, we remind you that WorldTwoDotZero is only a game, a web walk to take together, it doesn’t have any commercial purpose.