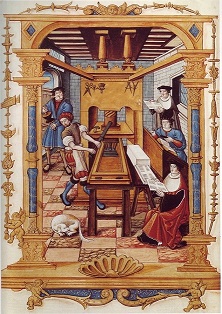 We express ourselves, we communicate, we create,… we are an extremely creative species, able to invent new forms of communication and to adapt these forms to the context we are living. We live to communicate and we communicate what we are living.
Among the large number of forms of expression and communication the writing has certainly had a crucial role, primal, in the human evolution. It permitted to pass on concepts and, of course, our history in a practical way. It permitted the spread of learning and the custody of knowledge.
Therefore there is a thread that ties the petroglyphs, the papyruses, the incunabula, the books from the 1500s, the first bible printed by Gutenberg in 1455 and the modern daily  newspapers; a characteristic that comes along with the mankind’s history.
However, all these forms of communication have in common another important characteristic: they have an unique and imposed direction of reading, a well defined structure of the content enounced, linear and sequential. Furthermore, due to their sequential structure, they can physically be transposed on paper (or on other material).
At some point of our history, a recent point, our species has invented a new form of communication, a new form of writing, deprived of all these characteristics and by cause of this radically different and not sequential: the hypertext.
The hypertext cannot be transcribed on papery material, it doesn’t have a linear/sequential structure, it connects itself to other different textual components, it provides manifold and alternative directions of reading, it has a starting point and many different end points. The hypertext enables to reach immediately the quotation of another text, a reference, an information placed “elsewhere”.  If it reaches an image, a video or an audio, the hypertext becomes hypermedia. The hypertextuality dissuades, temporarily or perhaps forever, the reader’s attention from the main theme leading him on other dimensions. It is no coincidence that the reader, becomes online navigator, an explorer free to reach even concepts far from his initial objectives, sometimes free even to lose himself among the endless alternatives offered by web.
We have already seen how the virtual component of our society, the cyberspace, represents a different alternative, an option, in terms of sociality, relationship, transposition of one’s own self to the real world. But the web, the new web, adduces also an innovative way of spreading, communicating, transmitting the knowledge, a different way of reading, no more sequential.
The hypertext (or the hypermedia), it’s the direct expression of a relocated decontextualized universe, fast, syncretic, multitasking and multimedia. This plot between the contents will have, in the long run, remarkable effects in our receptive ability and it will change radically our way of reading, perceiving, as well as our way of focusing, no more sequential but multimedia, widespread, even if not always rational.
It may seem impossible to us now, but within a few decades, the texts characterized by the presence of single characters and with a sequential structure, with a single starting point and a single end point, will be very rare. They will be substituted by composite symbolic systems, characterized by icons and symbols in correspondence of services or contents, free of charge or with fee, links to images, videos, audio tracks, comments, alternatives,…
The new texts provide and they will keep providing more and more manifold meanings and different conclusions, the sum of the different components that are part of it.
As it happens often, the group expresses a greater creativeness compared to the single ones that are part of it, even more than the mere sum of the single ones. The same is applied to the hypertext. It can become a superior expression compared with the descriptive and multimedia components, quoted and posted, determining a jungle of logical paths. This proliferation of alternatives, or rather, of contents, bonds, images and concepts, promotes another phenomenon typical of web: the serendipity, in other words, the possibility of finding something of very different, better or worse, than what it was initially wanted and looking for.
The “bible 2.0”will be multimedia and interactive, characterized by many alternative ways of navigation, quotations, on-line sermons, films, narrations, comic strips, even the possibility to confess oneself in real time as well as the possibility of sharing the own steps with friends or other believers, to comment, to underline, to browse the judgments and the posted experiences or tweeted by others, to pray, to sing and who knows what else.
This is what awaits us.